If you’re in the Northeast like us, then Mother Nature gave you one last one-finger salute to close out the winter.  5 inches of snow got dumped on the Philly area yesterday, and Jack found himself climbing up a ladder at 5:30 this morning to once again shovel the roof to stop it from leaking.

(Yes, I took this photo from inside the warm house.  No, I wasn’t being a total wuss, I made him a hot breakfast since he wouldn’t let me help out there.)

Despite the “gaaaaahhhhhh!!!!!”-inducing storm, the snow really was beautiful.  It was warm enough that the snow was thick and heavy, so it clung to all the trees and made our yard pretty darn gorgeous.

Our orange front door standing out against that sea of white.

So, given that the snow is still in our lives, I figure it’s time to fill you in on something that’s been freaking me out for several months now.  We have a psycho stalker snowman living in the house.

I got him at a holiday work party a couple of years ago, and while he’s cute on the surface, there’s some stuff about him that never quite sat well with me.  I just don’t trust him.  He creeps me out.  Just look at him:

So after the holidays this year, I didn’t want him as part of our Xmas decor anymore.  It’s like that song “Creepy Doll” by Jonathan Coulton — I was tired of getting the heebie-jeebies every time I walked past him, so there was no point in storing him away for another year.  So Jack said he’d get rid of him when he put our bins of decorations up in the attic.

A few weeks later, I walked into my closet to get dressed for the day, and just about jumped out of my skin.

He was back!!!  Gaaaaahhhhhh!!!!!  He was stalking me, hiding in my closet, waiting to bash me over the head with that little cardboard shovel of his.  Jack insists he had thrown him out, so he must have done his creepy snowman magic thing to sneak back into the house and terrorize me.

So for the past few months, Jack and I have both been trying to get rid of him, to no avail.  I may or may not have hidden him away in Jack’s bathroom drawer… 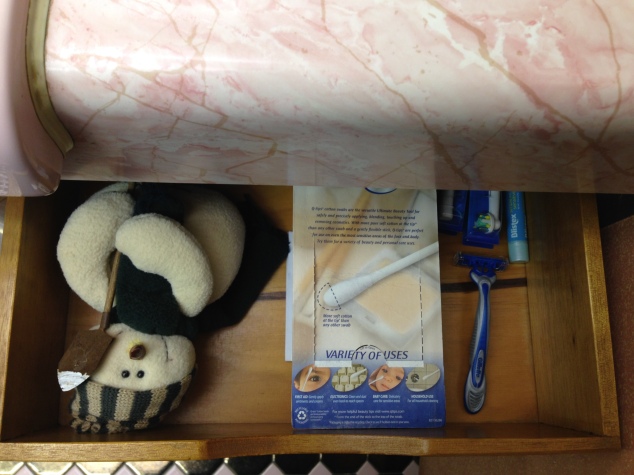 A couple of days later, I found him hiding under the covers on my side of the bed, hoping to attack me in the dark.

Then Jack found him lurking in the shower the next morning.

He disappeared for about a week, and we thought we were finally free…  then he turned up, grinning his terrifying grin, in the washing machine.

For the past few weeks he’s been MIA.  I wasn’t sure whether to breathe a sigh of relief, or be on guard.  Every time I turned a corner, or opened a door, I half expected to see that murderous little face staring at me.  And then the other night, I opened the bar to get a bottle of wine for dinner…

AAAAAIIIIIIIIIIIIIIEEEEEEEEEEEE!!!!!!!!!!!!!!!  He had been lurking in there patiently for weeks, day in and day out, trying to disguise himself as a bottle of wine so he could shovel my eyeballs out when I finally tried to uncork him.  It’s a miracle I escaped within an inch of my life.  Truly.

I’ve disposed of him in a secret location, so hopefully we’re finally free of him and can sleep in peace.  Jack keeps asking me, “is this game going to continue?”  I don’t know what game he’s talking about…  I’m trying to survive here.

4 thoughts on “There is a psycho living in our house.”