Spriiiinnnngggggg is almost here!  This weekend the temps were just short of 50 degrees, and combined with the lengthening days, Jack and I got a burst of spring cleaning energy.  We’ve spent the past 2 days dusting, vacuuming, scrubbing, and just all-around straightening up.  It feels awesome.  Amazing to think that just a couple of days ago, the temps were in the single digits and we were dealing with the latest of a run of weather-related house mishaps…

But let’s go back a few weeks first.  We all know that this winter has SUCKED, especially day after day of super-low temps… and a few weeks ago, we became one of the statistics we were hearing about on the news.  Because our water main froze and burst.  Just as we sat down to dinner, we heard a sound that, to me, sounded like someone was spreading road salt in our driveway.  You know how the salt is so coarse, if you’re right behind the salt truck you can hear the pellets going *tink* *tink* against your car?  That’s what I heard.  And we had just hired someone to plow our driveway whenever we got a bad storm, so I figured the plow company was getting a jump on the next snow.  Jack, on the other hand, knew what that sound actually was — water shooting out of a pipe and hitting stuff, hard.  With a number of choice expletives, he shot out of his chair and disappeared into the garage.  Not realizing how bad the situation was, I moseyed in the direction he’d just run…  and opened the garage door to find him drenched from head to toe, standing in 6 inches of water, and everything in the garage soaking wet.

Thank goodness the pipe that burst was in our garage, and not inside the house.  And thank goodness we were home and heard it the moment it happened.  Because I can’t even imagine what the state of our house would have been if either of those things weren’t true.  Jack was able to shut off the main, and he set about squeegee-ing water outside (did I mention it was literally about 4 degrees out that night?) while I called every 24-hour plumber on Angie’s List.  No surprise, the handful of plumbers I managed to get a return call from were booked to the gills with emergency calls…  lots of burst pipes around town from the freezing temps.  Sigh.  Finally I found an amazing guy who agreed to come out and help us instead of going home from his final call…  he got here at 10pm and worked his hiney off until midnight.  (Including begging the local Home Depot to open up after they’d already closed for the night, so he could get a part he needed to fix our pipe.)  By the time he arrived, the garage was floor to ceiling ice — the floor was a skating rink, the walls were covered in ice drips, and the entire side of Jack’s ’55 was coated in ice as well.

You can see some of the ice if you look at the windows in this shot.  Brrrrr! 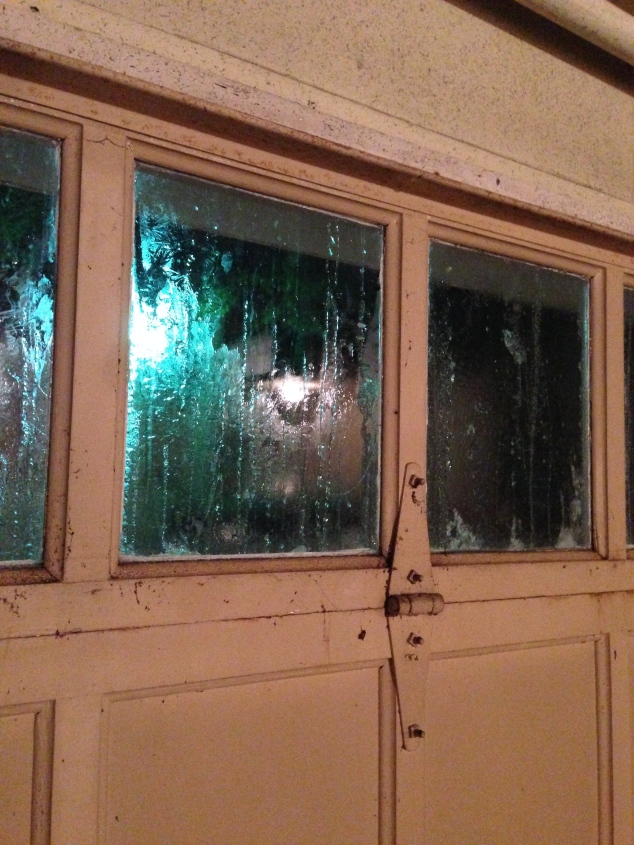 It was crazy.  But our new plumber-for-life rocked it, fixed the problem, and we went to bed relieved and yet worried what wintry problem might happen next.

The following week, we got our answer in the form of gurgling bathroom sinks and a shower that filled with water every time we used it.  Eek.  After calling our septic company to come out and pump the tank just in case (because we certainly didn’t want to risk that backing up, especially in the winter), we called our plumber bestie to have one of his guys come back to the house and snake the bathroom pipes.  He found all sorts of fun stuff way down in the pipes, stuff that shouldn’t be anywhere near a septic system like bathroom wipes and floofy toilet paper from the previous owner (you’re pretty much locked into using Scott toilet tissue when you have a septic system, anything else won’t break down the way you need it to).  But he cleared everything out, and got the pipes working like a champ.

Then this past Thursday, if you’d looked towards our backyard at 11pm, you would have seen Jack up on the roof with a shovel.  Because just before we went to bed, the roof over our master bathroom (goodness gracious, is that bathroom haunted?) started leaking.  Once again, it was the crazy weather — a buildup of snow and ice, with another 8 inches on top of it that day, finally made the roof cry “uncle”.  So Jack and I got out of our jammies, bundled up (the temps were in the single digits again), and slogged through the deep snow out to the backyard.  One of the cool things about our roof is that it’s a bit California-style, meaning it’s partly flat…  there’s a big flat lip of roof all the way around the house, and it points up in the middle.  Which makes the house look awesome…  but isn’t good when there’s piles of snow and ice on top of it.  There’s a reason houses in this part of the country all have pointy roofs — so the snow doesn’t lie flat on them in the winter.

Heading up in the dark… 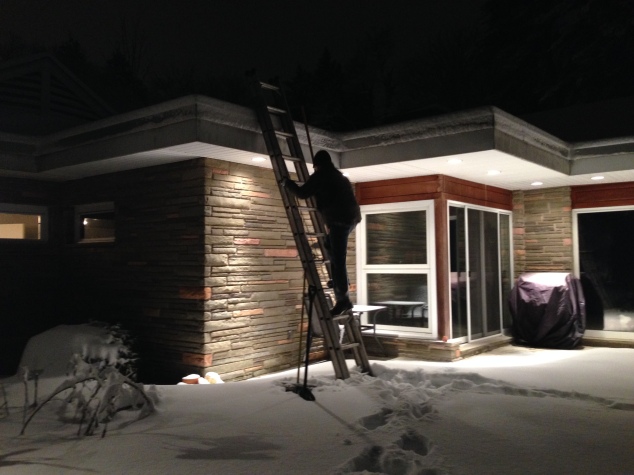 Clearing the lighter snow so he could get up there as safely as possible. 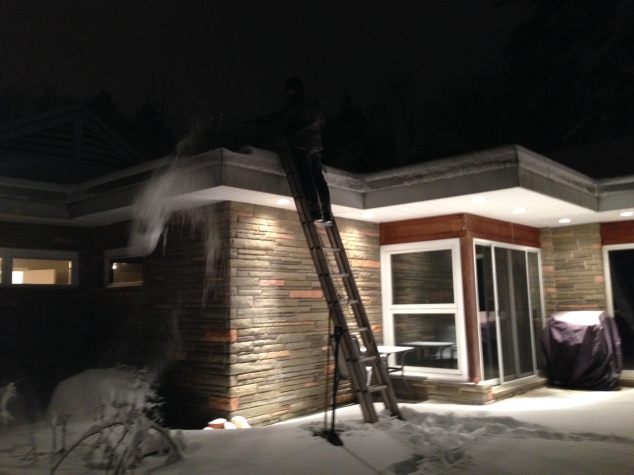 So, Jack spent an hour up on the roof, in the dark, on a freezing night, shoveling piles of snow and slush so that it would stop leaking into the house.  I stayed down below to spot him, and ducked out of the way as giant glops of heavy slush crashed to the ground around me.  It was a massive workout, enough that Jack needed an appointment with our chiropractor the next day.  Ugh.

Skunk wasn’t much help… all he could do was supervise from the rumpus room. 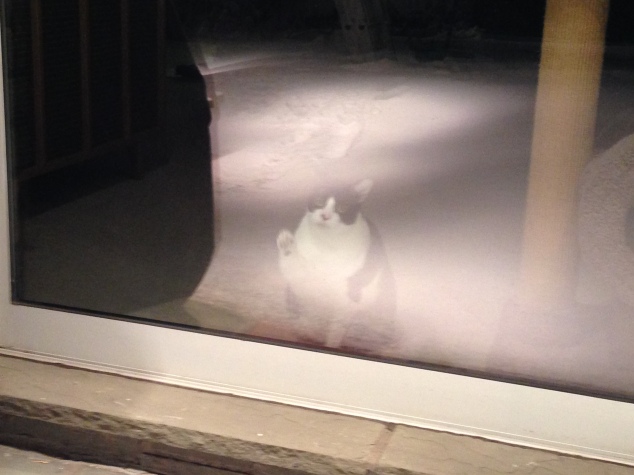 Now with the temps rising, we’re hoping this will be it for the weather-related issues for a while.  Our nerves and our bank account will be grateful.  All of the rest of our savings went to plumber fees and other fixing costs, so furniture-buying and all the other fun house stuff we had planned will have to wait a bit.  But no worries, the important thing is that we’re doing right by the house and keeping it as happy and healthy as we can.

3 thoughts on “Sometimes, loving your house means just working to keep it standing.”