As I mentioned in our last post, I’ve been working on de-nicotine-ing as much of the house as possible.  A lot of it was removed when we stripped the wallpaper and tore out the carpets…  but there are several surfaces that aren’t getting stripped or painted that we need to scrub down to get rid of the stains and the ashtray smell — mainly the kitchen cabinets, and the wood paneling in the living room and rumpus room.  Nicotine stains are truly amazing, because the stuff practically bakes onto every surface and is next to impossible to remove.  Thank goodness for this cleaner called LA’s Totally Awesome, it’s been a lifesaver because it dissolves the stuff like it’s nothing.  Soap and water barely make a dent, but this spray is genius.  (And you get it at the dollar store, which is even better.)  If you don’t want to see any more freaky nicotine cleaning stuff, skip the next few photos and go down to the next block of text, where you’ll learn about the unexpected construction Jack had to handle this week.

Dressed up to tackle the nicotine and grease in the kitchen!  I took everyone’s advice after the last video and wore gloves and a fumes-blocking mask.  Even with this heavy-duty cleaner, it took 4 hours to clean the kitchen because of the amount of grime. 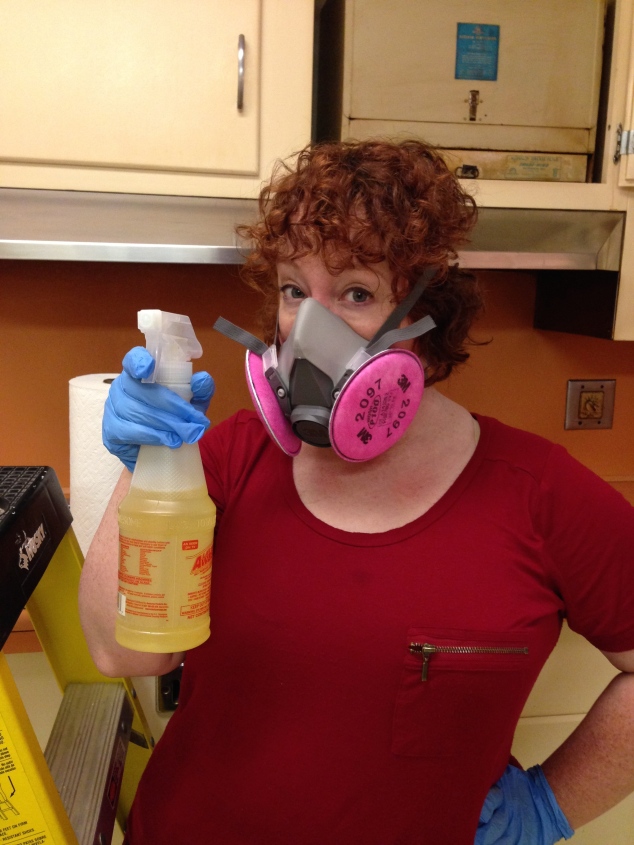 This is one of the kitchen walls a few seconds after spritzing it with Totally Awesome.  I know, totally nasty!  But it also shows how amazing that cleaner is, that it completely dissolved all that baked-on nicotine and grease with just a few sprays.

And here’s a short video of me cleaning one of the AC vents from the living room.  We thought they were a sort of bronze metal, but nope.  (Again — nicotine sludge.)

Okay, enough grime for one weekend.  Besides all the cleaning, Jack has been super busy dealing with an unexpected issue in the living room.  When we bought the house, we knew from the inspection that there was a little bit of dampness along the baseboards in the corner that joins the living and dining rooms…  so last week, Jack removed the baseboard there to see what was going on.  And he discovered this: 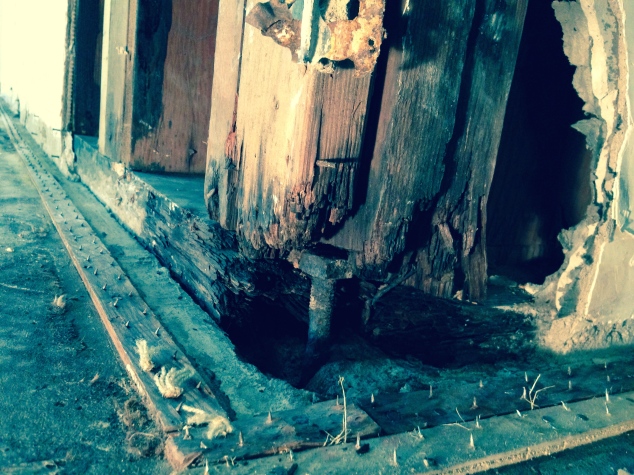 I’ll back up for scale.

Turns out there is a little pipe in there (you can see it in the middle of the photo) that was capped a long time ago, but has been leaking inside that wall for years, rotting away the support beams.  Oh yeah, did I mention that’s a load-bearing wall?  Because it is.  (More on that in a sec.)  So we went from “hmmm, let’s get rid of that moisture” to “OMG we need to rebuild part of a load-bearing wall to keep the house from going *pppfffttt*”.  Thank goodness our contractor was able to fit us in to fix it a few days later…  he cut out that section of the wall, repaired everything inside, and made it like new:

So now we’re a bit poorer, but back on schedule for everything else we have to fix to make this house habitable.

So, let’s go back to this load-bearing wall thing.  When the rotting was uncovered, that little pipe was driving Jack crazy: there’s no bathroom on the other side of the wall, so why was there a pipe in there to begin with?  After much brain-wracking, and an intense study of the architectural plans for the house, he figured it out: our dining room used to actually be the patio!  Which is why that wall is load-bearing — it used to be the outside wall to the house, and that pipe was probably the line for the garden hose. Which MEANS, and it was confirmed by one of the plans Jack found in our stack…  our house wasn’t BUILT in 1957, it was RENOVATED in 1957!  We couldn’t figure out why all the architectural plans said “renovation”, until Jack found what was probably the very first rendering done for the 1957 owners; it showed that our dining room is where the patio used to be, and the cool “rumpus room” and the beautiful big patio off of it, plus half of the kitchen, were add-ons as well.

It looks like the 1957 owners bought a smallish L-shaped rancher, and completely gutted and renovated it into the mid-mod pad it is today.  All the stone exterior, the cool huge windows, the custom kitchen, the entire back of the house, all of it was done as part of a massive rebuild.  Which then begs the question: when was our house ORIGINALLY built?  The county property records list it as 1957, but we now know that’s not the case.  So we’re probably going to have to go in person and dig through hard copy documents to find the actual build date from the 1940s?  1930s?  We shall see!

3 thoughts on “It’s been a busy week here at Biohazard Manor.”