You don’t know what…  we can find…  why don’t you come with me, little girl…  on a magic carpet ride…

As we mentioned in our previous post, our first humongous priority is de-smoke-ify-ing this house.  Which is easier said than done, because over several decades smoke residue sticks to EVERYTHING.  In order to get rid of the stale smoke smell, we need to remove or clean everything we can get our hands on…  and the major culprit is the carpet.

It has to go anyway, smoke or no smoke — it’s several decades old, old enough that the padding underneath turned rotten and caused all of the carpeting to wrinkle and pull.  So one hour after we closed on the house, Jack was on his hands and knees with a knife to start with this massive undertaking. 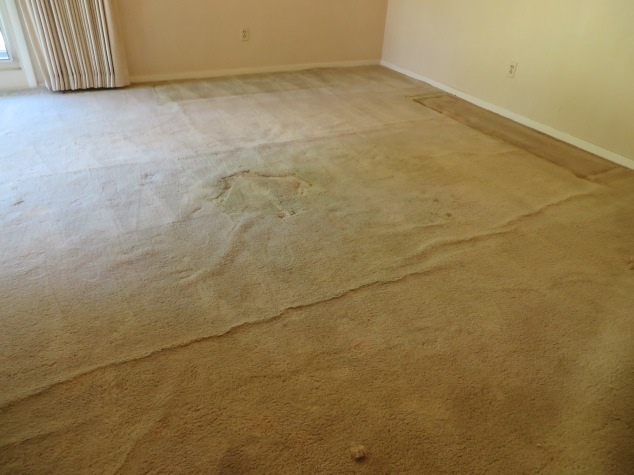 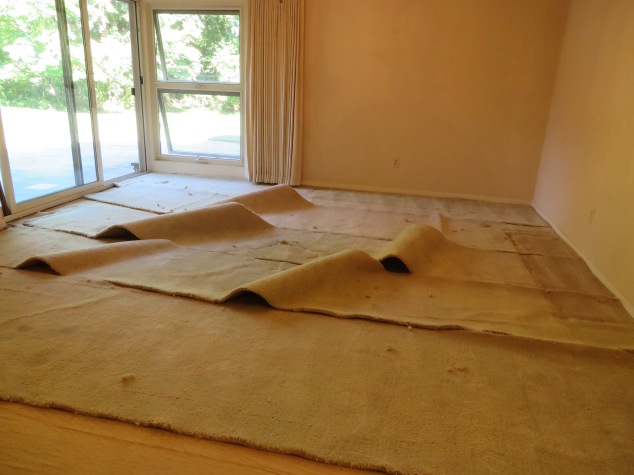 It turns out the padding wasn’t just rotten, it was full-on dried out.  Almost every square inch of padding in the entire house (and every room is carpeted except for the kitchen, so that’s a lot of padding) has taken on the consistency of hard crackers.  So Jack’s been ripping up the rugs room by room, and then going back with a long-handled floor scraper to dislodge all of the hard stuff that’s stuck to the sub-floor from decades of use.

Needless to say, it’s a bit dusty in the house at the moment. 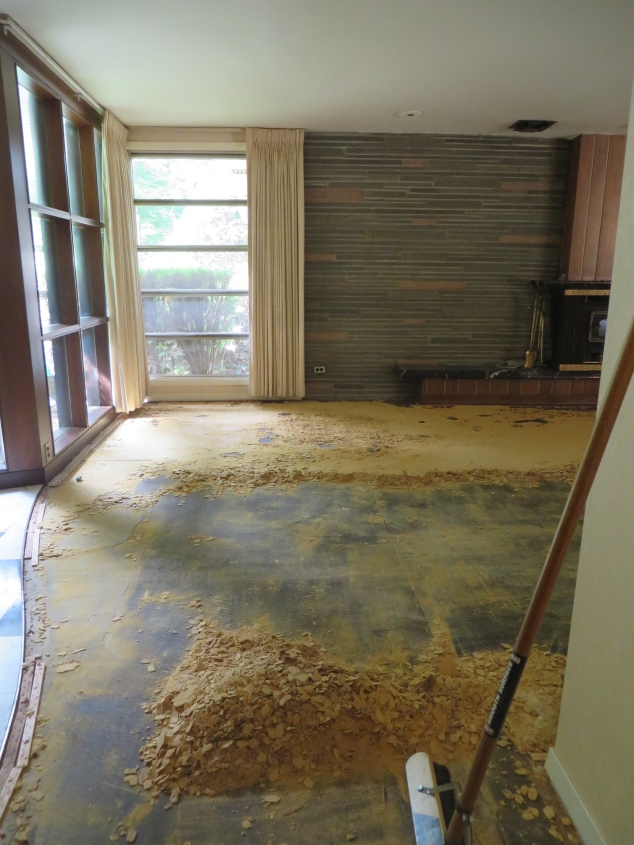 Ripping out the carpets also helped us uncover the source of a problem our inspector had identified in the master bedroom.  He had noticed that the floor had about a 2-inch slope from the center to the edges, but we couldn’t get to the root of it until we peeled the carpets back.  Turns out there is years of water damage in one corner of the room that started to rot the floor and wall away, and messed with the sub-floor.  Add rebuilding that to the list of help we’ll need from our contractor!

Not everything we found was negative, though.  We discovered a really cool feature of the house that must have been state-of-the-art at the time: alarm sensors on the floor!  This house is alarmed to the hilt, with bells and panic buttons and such in every room; the sensors were yet another way to keep them safe.  At each doorway, as well as the entrance to several rooms, a wired pad was installed under the carpet padding.  If anyone broke into the house, when they stepped on the carpet the weight would trigger the sensors in the pad underneath, and the alarm would go off.  Genius!

It’ll be a bit before we put down new carpeting, given all the floor-fixing that has to be done first.  But once it’s finished, wow will this place look so much better!